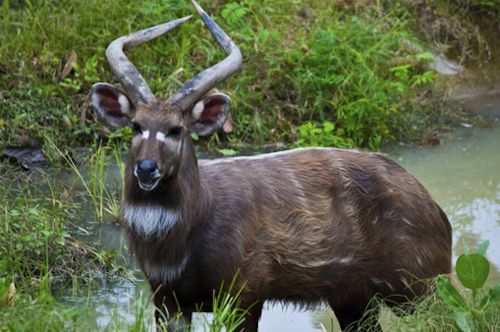 The sitatunga (Tragelaphus spekii), a highly restricted semiaquatic tropical antelope similar in appearance to the closely related bushbuck, but the male is larger with a shaggier coat, both sexes are striped, and it has uniquely splayed hooves adapted to its favored habitat of papyrus, wetlands and associated ecosystems.

It is found in suitable habitats throughout Uganda, including six national parks, but on safari is likely to be seen easily only in the Katonga Wildlife Reserve. It’s currently endangered throughout its African range. The major causes of threats are wetland reclamation, hunting and unsustainable harvesting of the plant species that constitute its food. In addition, the species has low resilience to these threats. This partly explains the species’ declining populations and local extinctions as in Niger, Togo and some parts of East Africa.

The Sitatunga exhibits great elongation of the hooves, which have a wide splay and naked padlike pattern. They possess unique flexibility of the joints at the feet, representing structural adaptations for walking on boggy and marshy ground.

Coloration varies geographically and individually. Males are gray-brown to chocolate-brown, females are brown to bright chestnut, and calves are bright rufous-red, woolly coated, spotted, and striped. Adults are long coated and have characteristic whiteish marks on the face, ears, cheeks, body, legs, and feet.

Males are considerably larger than females (100 cm tall vs. 75-90 cm tall). Males possess horns ranging in length from 508-924 mm. Horns are characterized by two twists and are ivory tipped.

Sitatunga are semi-social, nonterritorial, and sedentary. Swamps are highly productive ecosystems and sitatungas can live at densities of 55 square kilometres or higher. Females tend to form herds and males associate together or with females until sub-adult. As adults, males avoid one another.

These antelope move through the swamp along established pathways, they have numerous side branches leading to feeding grounds and neighboring riverine forest. They are active both diurnally and nocturnally and may move into marshy land at night. They typically feed at any hour in areas where they are protected and they also lie on platforms of vegetation that each animal prepares for itself by repeated circling and trampling. They also stand and ruminate in the water.

Sitatungas are slow and clumsy land runners, but their plunging run works well in water. Their broad and splayed hooves keep them from sinking in soft ground as deeply as other ungulates. They are usually slow and inconspicuous, and are good swimmers.

Males often bark at night, sometimes as an alarm signal, or perhaps as a way of announcing their location. Females have a single higher-pitched bark. A male following a female in a low stretch may utter a suppressed roar.

Breeding occurs throughout the year, males are polygynous, and females produce a single young at an average interval of 11.6 months. The mean gestation period is 247 days, and sexual maturity is attained at approximately 1 year by females and 1.5 years by males.

A male approaches a female in a low stretch posture while the female may back away slowly. When the male comes within a few inches of the female, she may suddenly bound away, causing considerable commotion in the swamp. The male persistently follows, but always stays behind. It is characteristic of this species that the male lay his head and neck on the female’s back and lifts his forelegs off the ground in a mounting attempt. The female responds with neck winding, in which her neck angles down obliquely and her head turns sharply up, thrusting forward, upward and back with mouth wide open. The male then mounts with his head resting on her back, and her head and neck point forward and down.

Females hide their calves on platforms in secluded dry reeds growing in deep water. Calves are unable to move slowly and deliberately through the swamp like adults, and follow their mothers closely for several months only after learning how. A mother feeds near the calf’s hiding spot, finishes, and walks up to the calf. It licks the young’s snout, then moves away. The calf gets up and follows the mother, and she leads it to a protected place where it can suckle.

In conclusion, the Sitatunga are very interesting antelope species that occupy the marshlands. They can be seen in