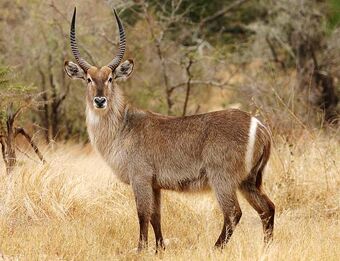 These antelopes are large, robust animals; males are generally about 25 percent larger than the females. They have large, rounded ears and white patches above the eyes, around the nose and mouth, and on the throat. Only the males have horns, which are prominently ringed and as long as 100 centimeters (40 inches). The horns are widely spaced and curve gracefully back and up. They are sometimes used with lethal results when males fight one another over territories.

They have a shaggy brown­-gray coat that emits a smelly, oily secretion thought to be for waterproofing. In East Africa, two types occur: the common waterbuck and the defassa waterbuck, distinguished only by the white pattern on the rump. The common waterbuck has a conspicuous white ring encircling a dark rump, while the defassa has wide white patches on either side of the rump. 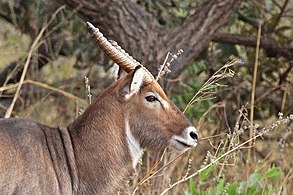 This large antelope is considered, by some authorities, to be a distinct species, K. defassa (the common waterbuck found east of the Rift Valley with a white on its rump), but the two races interbreed where they overlap.

Defassa waterbuck live in small herds and are most often seen grazing near water. They are found in suitable habitats in all four of Uganda’s savannah national parks: Murchison Falls, Queen Elizabeth, and Kidepo Valley National Parks and other savannah parks in East africa.

Waterbuck live in wide, separated ranges that are shared by many females and territorial and non-territorial males. The size of a waterbuck’s home range depends on the quality of the habitat, population, and the age and fitness of the waterbuck. When they’re in good health and are younger have the largest ranges.

The home ranges of females may overlap, resulting in small herds that average 5 – 10 animals. Within these herds, there is no established rank order. Females, however, are most commonly found alone or in pairs, and it is believed that herds of waterbuck are random meetings of individual waterbucks.

Horns begin to form on males at 8 – 9 months, which marks their separation from the females. These young males then form bachelor herds and remain in these until they mature. The bachelor herds are composed of anywhere from 5 – 10 waterbuck. These are closed groups and the hierarchy is based on seniority.

Upon maturation, the bulls become territorial. The activity of the waterbuck is affected by seasonal differences, habitat, grazing conditions, distance from water, and the number of predators in the area. When there is less water available and the conditions are dry, waterbuck need to rest more. While they have been found active at night, the waterbuck is more likely to be active in the daytime.