Vervet monkeys use different sounds to warn of different types of predator. For instance, vervets have distinct calls to warn of the sighting of a leopard, a snake, or an eagle.

Young vervet monkeys appear to have an innate tendency to make these alarm calls, and adult monkeys seem to give positive reinforcement when the young make the right call, by repeating the alarm. Negative reinforcement has also been observed. One researcher reported seeing a mother run up a tree after her infant gave a “leopard” alarm. But there was no leopard — just a harmless mongoose — and when the mother caught up with her infant, she gave it a smack.

How to Identify a Vervet Monkey

This small, black-faced monkey is common in East Africa as it adapts easily to many environments and is widely distributed.

There are several subspecies of vervet monkeys, but generally the body is a greenish-olive or silvery-gray.

The face, ears, hands, feet and tip of the tail are black, but a conspicuous white band on the forehead blends in with the short whiskers. The males are slightly larger than the females and easily recognized by a turquoise blue scrotum and red penis.

The vervet is classified as a medium-sized to large monkey-males weigh up to 17 pounds. Its tail is usually held up, with the tip curving downward. Its arms and legs are approximately the same length.

Where to find the Vervet Monkey

The Vervet Monkey ranges throughout much of Southern and East Africa, being found from Ethiopia, Somalia, Sudan and south to South Africa. It is not found west of the Great Rift Valley or Luangwa River.

In East Africa these monkeys can live in mountain areas up to about 13,000 feet, but they do not inhabit rain forests or deserts. Their preferred habitat is acacia woodland along streams, rivers and lakes. They are diurnal, sleeping and eating in trees from which they seldom venture.

In Uganda there at least 4 races that you can spot during your Uganda safaris out of the 20 recognised worldwide; the black faced vervet (C.a.centralis), Naivasha vervet (C.a.callidus), Jebel Mara tantalus (C.a.marrensis) and Stuhlmann’s green monkey (C.a.stuhlmanni). They are common and widespread even outside of national parks, but they are absent from forest interiors and Afro-alpine habitats. 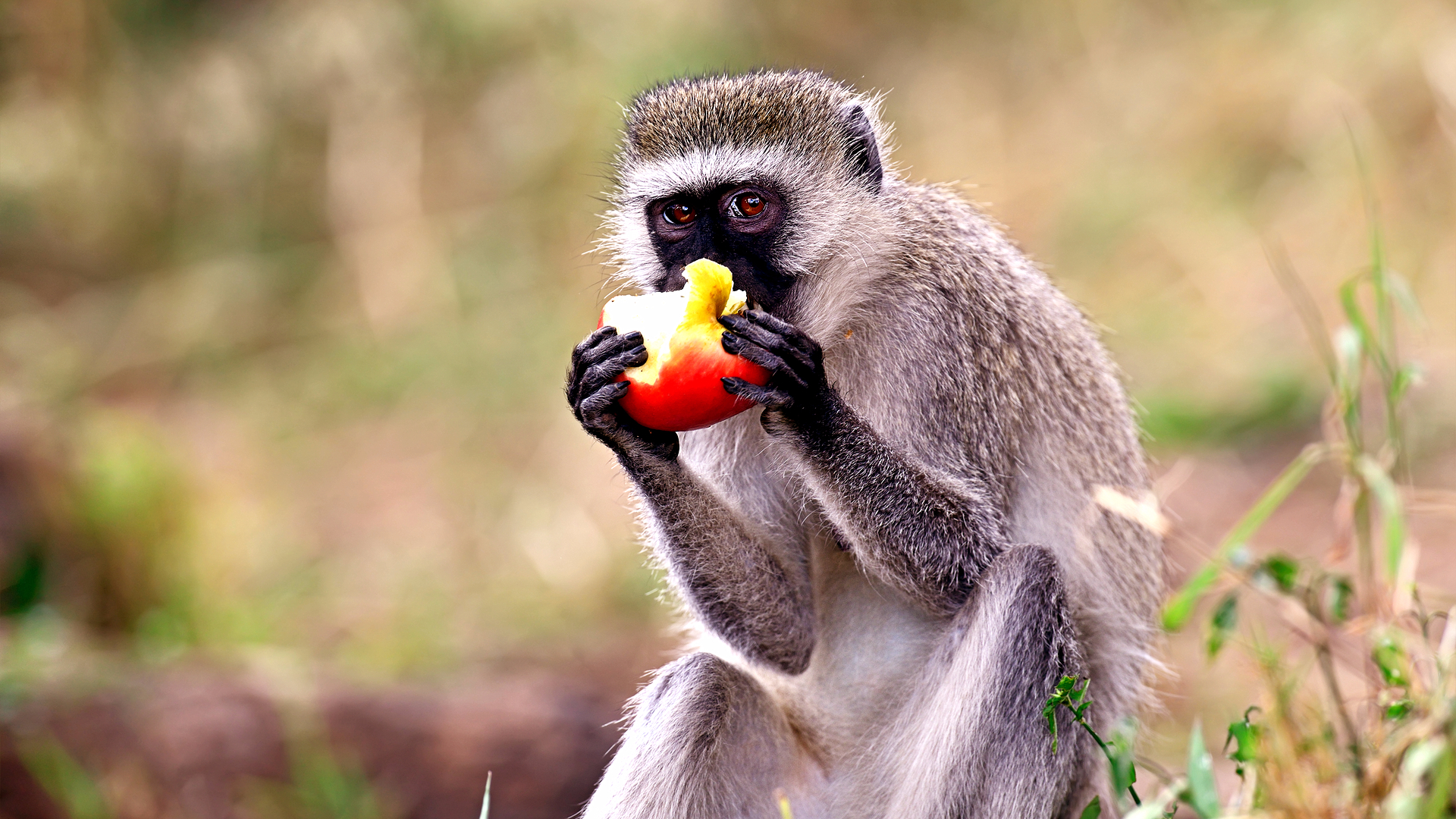 Leaves and young shoots are most important in the Vervet diet, but bark, flowers, fruit, bulbs, roots and grassturtles

Vervet society is built on complex but stable social groups (called troops) of 10 to 50 individuals—mainly adult females and their immature offspring. There is a strict social hierarchy among troop members; a mother’s social standing predetermines her offspring’s, and even adults in a family must submit to juveniles of families with higher social status. Males transfer troops at least once in their lifetime, beginning at puberty. This is a dangerous process not only because of the predators they may encounter in transit, but also because troops dislike immigrants.

Grooming is important in a monkey’s life. Vervets (as well as most other primates) spend several hours a day removing parasites, dirt or other material from one another’s fur. In the primates’ hierarchy, dominant individuals get the most grooming. The hierarchical system also controls feeding, mating, fighting, friendships and even survival.

Close social bonds with female relatives begin to develop in infancy, relationships thought to endure throughout life. Infants are of great interest to the other monkeys in the troop; sub adult females do everything possible to be allowed to groom or hold a new infant.

After a birth, the mother licks the infant clean, bites off the umbilical cord and eats the afterbirth. The newborn has black hair and a pink face; it will be 3 or 4 months before it acquires adult coloration.

The infant spends the first week of life clinging to its mother’s stomach. After about the third week, it begins to move about by itself and attempts to play with other young monkeys. Vervet mothers are proprietary in the treatment of their babies, and some will not allow young or even other adult females to hold or carry them. Others gladly leave their infants in charge of any interested female. Researchers report that usually a female’s close family members will have the most unrestricted access to the babies. As the infants grow, they play not only with monkeys but with other young animals. Young vervets chase one another, wrestle, tumble and play “king-of-the-castle,” taking turns pushing each other off a high perch.

Vervet monkeys living near areas inhabited by people can become pests, stealing food and other items and raiding crops. This leads to a heavy annual slaughter by poison, traps and guns. In recent years, they have also been considered as a valuable research animal, making live trapping prevalent as well.