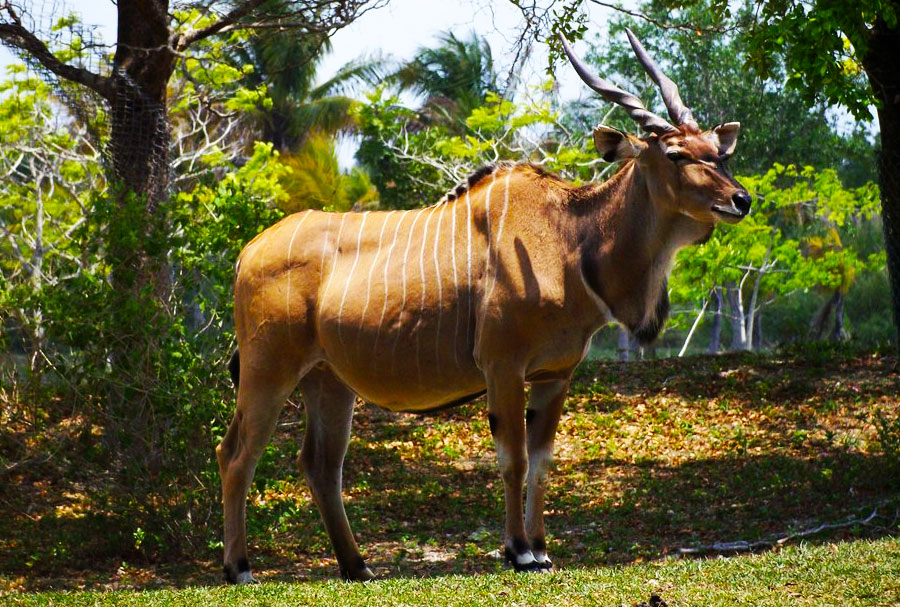 Elands are known as Eland antelope, there are two types of elands giant and common elands in Uganda we have the common elands they are the second largest distant cousins of antelopes in the world slightly smaller than the giants. With a smooth coat which is an orange-brown but it turns to grey as they age.

Elands are known to be very peaceful herbivores whose diet is primarily grass and leaves. Both sex have horns which have a spiral ridge but with different purpose, males horns are thinker and shorter than females although for females are more delicate.

During rutting season they use the horns to wrestle and battle heads rivals while females use their horns to protect their young ones from predators. The horns are stronger and are used to break off branches that are not in reach.

A common eland is slower and can only run 40km/hr. A male Eland weighs 942kgs much heavier than females who weigh 300 to 600kg, the female is smaller than the male in size an average weight of a small car. In spite of their large size they can jump long distances and heights of 8feet from stand still than other antelopes they can stand at a height of 2 meters at the shoulder.

An adult has thick growth of hair on the fore head these hairs can grow thicker with age which grows through a life span of 25years in captive and 15-20 in the wild. An Eland has hoofs which gives it comfortable walks and this feature makes it similar to the cattle family with a tip of the tail which is tuft with black fur.

They move in herds of about 500 animals which includes females, males and calves but move in separate groups or individually, females groups are larger while the males groups are the smallest, the members in the group stay together in search for food and water.

They travel in grassy plains during wet and dry periods, they usually feed in the morning and evening and can also feed at night during hot weather and spend most of their time sleeping but their feeding habit can adjust to surroundings due to seasonal changes and other causes when it’s hot they actually stay in the shades, when it’s cold stay in silent.

They feed on herbivore grasses and areas of flowering plants the feeds contain water which they can conserve by increasing body temperature since they only drink water when available.

Reproduction females become sexually mature at 15-36 months while males become mature at 4-5years of age mating occurs any time after  their sexually mature  but mostly in rainy season. Males always chase females to find out if they’re in estrus and test the female’s urine to see if she is fertile.

It will take 2-4hours before the female is mounted during these hours, the female will chose a male who fits her, sometimes keep running around  to attract different males which  can lead to a fight between the males. Males will stay in contact with females but also can mate with more than one female. The female will then go through a gestation period of 9 months producing one calf at ago although twins are rare. Nursery and groups are formed when females give birth.

After 24hours of delivery mother and calf will join the group while the Calves will befriend each other. The mother will nurse the calf for 3 months, then the mother will return to the female group. The calves can live the nursery group at 2 years and join the male or female group. Their need for water is low because they produce urine with a high urea content.

The milk is said to be nutritious with great value in the market and be stored for a period of 8 months without getting spoilt. A female can produce 7kg of milk per day that’s in milk fat than cow milk

Predators when elands are in danger they make loud barks and postural movement responses, communication, warning with their cute sense of smell and hearing gives them the ability to perceive danger although they have all sense of danger Elands are docile and inactive most of the time they can easily be killed and preyed on by lions, leopards, hyena, cheater, hyenas and wild dogs.

Elands were gradually decreasing due to the habitat loss caused by expanding human settlements until when the wild life authority took charge in conserving of the animals this saved a lot elands which are now in big numbers.

Humans look for skins of elands for leather and also their said to feed on Elands meat has a test compared to that of  antelopes. A protozoan infection that has a tsetse fly as a vector this causing bacteria which has caused many elands death they are hosts to several kinds of ticks.

Where to find Elands in Uganda National parks.

Mburo National park found between Masaka and Mbarara it’s close to the high way that connects Kampala to the parks in western Uganda. It’s the smallest in Uganda’s savanna national parks and it continues with plains to of Northern Tanzania. It’s one of the best parks to view the Elands during your game drive.

Kidepo National park a wilderness park dry, hot and a virgin park its borders Sudan in north and Kenya in the north west driving through Kidepo is an exciting experience you can feel yourself in the true wild.

Book a safari with mond safaris and for more information,

check us out at info@mondsafaris.com.