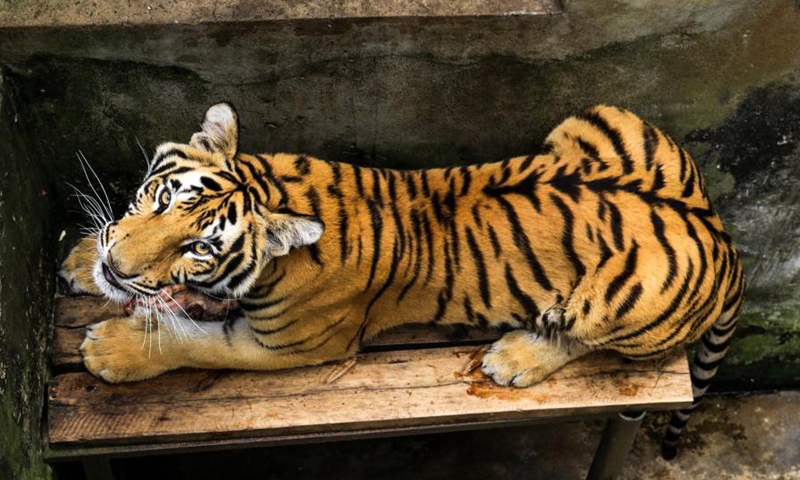 The Uganda Wildlife Conservation Education Centre (UWEC) has unveiled a pair of Tigers that were shipped into the country nearly eight months ago.

The pair, which comprises a male and female tiger, has ever since, been undergoing institutional quarantine and medical examination until they were deemed fit to occupy their holding facility. Dr. James Musinguzi the UWEC executive director noted that Uganda becomes the first East African country to accommodate tigers.

Tigers are territorial, generally solitary but social animals that only survive in Asia’s wild. Everywhere else in the world, tigers are kept in captivity. As of 2015, the global wild tiger population was estimated to number between 3,062 and 3,948 mature individuals. The Tiger has a muscular body with powerful forelimbs, a large head, and a tail that is about half of its full body.

Male tigers vary from the total length from 8ft-12ft and weigh between 90kg-300kg. Females have a total length ranging from 6ft-9ft whereas they weigh 65kg to 167kg.

Visiting the Uganda Wildlife Education Centre in Entebbe is one of the most popular weekend activity for local tourists. Entebbe is a small but very interesting town to stay in while in Uganda. Entebbe has Uganda’s only international airport, the official state house and several other key government offices. Entebbe would have been an Island on Lake Victoria had it not been for a stretch of land leading to Kampala city. What sets Entebbe apart is the serenity, historical role as an administrative center and other remarkable tourist attractions. One the most important tourist attractions in Entebbe is the Uganda Wildlife Education Centre. The Uganda Wildlife Education Centre (UWEC) or more popularly knowns as Entebbe Zoo offers a perfect introduction to Uganda’s incredible biodiversity and given its proximity to the capital Kampala, is one of the most visited and popular tourist sites in Uganda. The Centre is a successful mix of a zoo and a safari park because most of the animals live in large and spacious enclosures that are similar to their natural habitats.

Book a trip with us at #mondsafaris
For more information,
Email; info@mondsafaris.com
0Shares
PrevNext