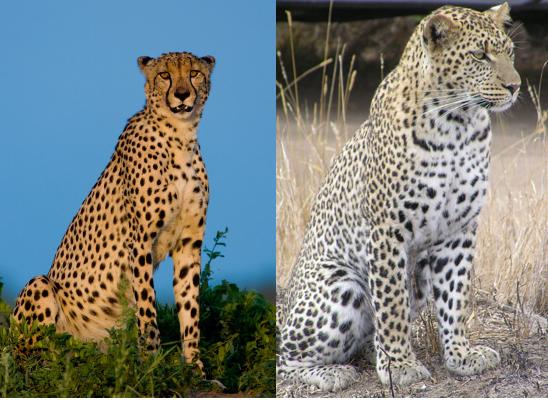 Have you ever asked yourself, what are the differences between a cheetah and a leopard? Upon first glance, they may look quite similar, but in fact, there are several distinguishing factors between the two! As the fastest animal on earth, cheetahs can run at highway speeds, while leopards can drag a full-size antelope up a tree.

Of course, there is scientific evidence that you can point to in order to distinguish a leopard from a cheetah – but, to the naked eyes (and ears), here are the key differences:

Cheetahs have round spots, while leopards have rosette-style markings. In both cases, their spots are used as camouflage from other animals.

Cheetahs have black “tear marks” that streak from the inner corner of their eyes, down their cheeks. These tear marks are used as an anti-glare mechanism against the bright sun. Think of these black marks as a football player’s eye black. Leopards do not have any tear marks.

Cheetahs purr, while leopards growl, snarl, hiss and roar on occasion. Cheetahs are the only big cats that cannot roar.

Cheetahs are slender, as they are built for speed, weighing roughly 80-110 pounds. whereas leopards are larger and more muscular, using their extreme strength to carry their prey up trees.

Hunting schedule: Cheetahs hunt during the day, while leopards hunt at night.

After a kill, cheetahs typically drag their prey across land to a secluded area to eat. They need to eat fast because they do not have the strength or size to fight off predators that will try to steal their food (like lions or hyenas). While leopards use their muscular bodies to drag their prey into trees where it is assured safe from other predators.

As a member of the Big 5, leopards are fierce predators and tend to live a solitary life. If you see more than one leopard at a time, it’s most likely a mother and cub or mating partners. Cheetahs often travel with siblings or solo.

Unlike lions who rely on other female members of the pride to help raise their young, cheetahs and leopards are on their own; both have to hide their cubs in cubby holes (thickets, kopjes, hollowed-out tree trunks) and hope their little ones are still there when they return with food.

The cheetahs and leopards in Uganda can be found in savannah parks like Kidepo valley national park.

Book a safari with us at #mondsafaris