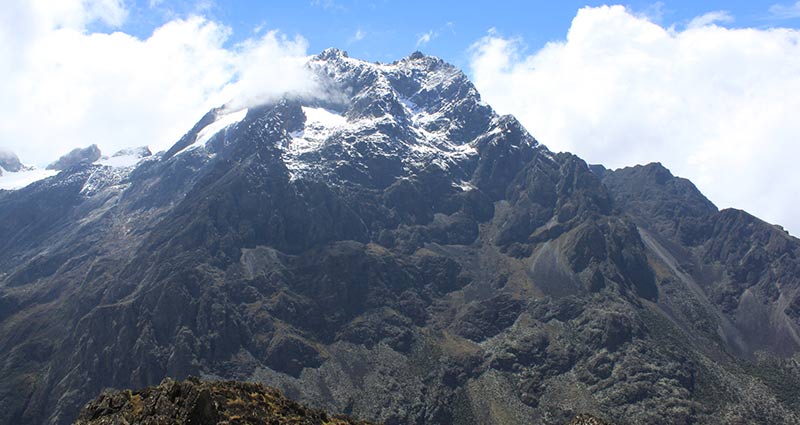 Mountain Rwenzori National Park is located within the “Mountains of the Moon”, as Mount Rwenzori is called. Mountain Rwenzori is situated in Western Uganda in the East African Rift Valley and straddles also to the Democratic Republic of Congo and its conservation area known as Virunga National Park. The mountain is the third highest in Africa rising up more than 16,700 feet above sea level and its highest peaks rise above the clouds and are permanently snow capped. The Rwenzori Mountain ranges are higher compared to the Alps and they have glaciers which are one of the sources of the longest river on earth, the River Nile. Margherita Peak is the highest peak on the ranges making it the 3rd highest peak in Africa together with its twin peak, Mount Stanley, which is within the park. The 4th and 5th highest peaks, Mount Speke and Mount Baker, are also within the park. The mountain ranges were first brought to the worlds notice in CE 150 by Alexandrian geographical researcher and photographer, Pletomy, when he described a stunning mountain which he christened “mountain of the moon.” Later in 1899, English explorer, Henry Morton Stanley, was as spell bound as Pletomy when he beheld the ranges and christened them the “Cloud Mountains.”

The Rwenzori national park, which is the conservation area for the mountain, is a UNESCO World Heritage Site and covers almost 1000 sq. km and strides across the districts of Kabarole, Kasese and Bundibudyo. It includes most of the center and the eastern half of the mountain and is known for its beautiful plant life coupled with waterfalls, glaciers and a lot of other unique mountainous vegetation. The park has glaciers, snowfields, waterfalls and has been portrayed as one of the mainly attractive Alpine areas around the world.

Things to do in Rwenzori Mountains National Park Uganda.

Rwenzori Mountain is an underrated gem that is largely undiscovered by many. The scenery on the mountain has been called some of the most beautiful on the planet! Mountain Rwenzori is covered in different types of vegetation and climate which will leave you spell bound as you scale its heights. It will not be unlike climbing into heaven. On the foothills of the mountain is farmland with crops such as coffee which is a very important cash crop in the country. From there you will behold beautiful land terrain and plant life of sub montane vegetation in the Afro-montane zone covered by luxurious tropical evergreen forest with a high richness in color and species. When you finally reach the top, you will behold the majestic snowcapped peaks that will leave you breathless and teary eyed.

Uganda as a nation is teeming with a richness in bird life and the ranges are no different. The Rwenzori Park is a dwelling to 217 species of birds and 17 of them can only be found in Rwenzori which justifies UNESCO labeling it a key Birding Area. At about 1800 meters, the variety will leave you captivated including the Handsome Francolin, Rwenzori Turaco, Long-eared Owl, Barred Long-tailed Cuckoo, Cinnamon-chested Bee-eater, Strange Weaver, Archers’ Robin-chat, Rwenzori Batis, White-starred Robin, Montane Sooty Boubou, Slender-billed Starling, Lagden’s Bush Shrike, Blue-headed Sunbird, Barbets, Golden-winged Sunbird, Greenbuls, IIladopsis, Apalises, Crimson wings and Flycatchers. You can also enjoy day hikes through the forests at the foothills as you enjoy unique activities like fishing with your hands in streams akin to Hugh Glass in the revenant.

You will have plenty of opportunities to witness the locals at the foothills of the mountain of the moon carrying out their cultural lifestyles and activities like cultural dances and if you are lucky, you might even get some lessons on drumming and dancing. You will also visit the Ruboni village where you will learn about the lifestyles of old of the forefathers of the mountains of the moon.

Lounging on the foothills: