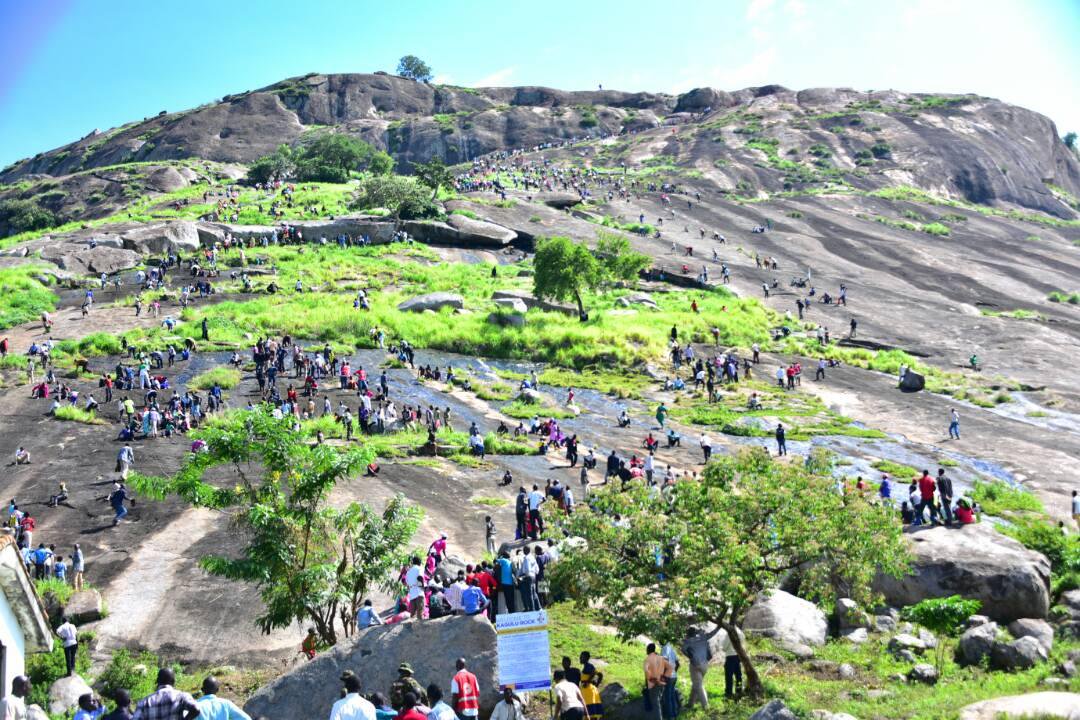 Kagulu Rock Hill is located in Buyende north-east of Kamuli town in eastern Uganda; the rock is a mystical wonder that rises approximately 3,500 feet above sea level with spectacular 360- degrees view around it with an expanse green vegetation, Victoria Nile and Lake Kyoga that come into sight.

The rock sits between two roads that divide at the foot each leading to different destinations i.e. Gwaya and Iyingo. The rock is a cultural heritage site and an important part of culture to the Basoga, the rock is open for those interested in rock climbing and one of the sides has steps that lead to the top.

Oral tradition has it that the Basoga migrated from the east and arrived across lake Kyoga and settled in the caves at the bottom of the hill. Another tidbit of history has it that this was the first settlement area for the Basoga people who had migrated from Bunyoro under leadership of Prince Mukama who later settled here because of the great views of the surrounding. It is no surprise that the Busoga Cultural Tourism Initiative adopted the hill for tourism.

It is further said that the prince was accompanied by his wife, Nabalongo and is said to also have married other wives who produced the first generation batch of the Basoga and this is why most people in the region trace their roots to Bunyoro and also the two Kingdoms share some norms and other cultural aspects. It is believed his sons gave rise to the clans in Busoga and it is from these clans that the Kyabazing (King of Busoga) is chosen. His sons were Gabula, Wakili, Nkono, Zibondo, Tabingwa, Ngobi and Kitimbo.

It is believed that the prince disappeared in obedience to God’s command of going out in the world and multiplying. Relics cane found on the hill; on the northern side are the remains of the boat that brought the prince from Bunyoro through lake Kyoga and a spear that the locals say belonged to him.

One side of the hill has several steps that go all the way to the top but you also choose not to take the steps and meander around till you get to the top. It is said that the stairs were built under the orders of former president Idi Amin as he wanted to establish a communication center on top of the hill.

At the top, there are stones that are believed to be royal seats for Kings who came to visit the hill. Next to these stones is an open space where the cultural rituals are performed. There is also a pool of water in which people used to bath to cure them from diseases.

You are also greeted with a spectacular 360 degrees view with an expanse green vegetation and views of the Victoria Nile as it enters lake Kyoga. Also, the rocks have a waterfall emanating from the rocks and cascades downhill, caves at the bottom of the hill are another thing to explore. While descending the summit, it is no doubt that we get to appreciate the value of history.

If you are a keen adventurer and interested in rock climbing, this can be added you’re your to do list during Uganda safaris especially with the great scenery it offers and photographic moments as you hike.