Impala (Aepyceros melampus) are medium sized antelope, lightly built, with the reddish-fawn upper parts becoming paler on the sides; the chest , belly, throat and chin are white. The tail is white with a central black line on the upper surface, and each buttock has a vertical black blaze. A diagnostic characteristic is the tuft of black hair on the lower rear edge of the hind leg, as this is not shared with any other antelope.

This slender, handsome antelope, though superficially similar to the gazelles, belongs to a separate subfamily that is more closely related to hartebeest and onyx. The impala can be distinguished from any gazelle by its chestnut coloring, sleek appearance and the male’s distinctive lyre-shaped horns. An adult impala can jump up to 3m high and has been known to broad-jump for over 10m.

They favor well-wooded savanna and woodland fringes, and are often abundant in such habitats. In Uganda, impalas are found only in Lake Mburo National Park and Katonga Wildlife Reserve but have been recently reintroduced in Pain Upe Game Reserve. 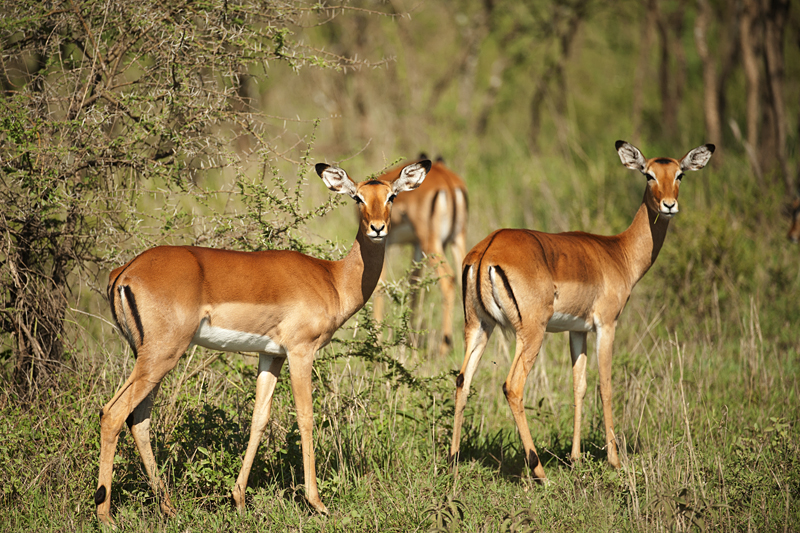 The Impala (Aepyceros melampus) formerly occurred widely in southern and East Africa, from central and southern Kenya and north-east Uganda to northern KwaZulu-Natal, with a small disjunct population of Black-faced Impala in north-west Namibia and south-east Angola. Their current distribution remains largely unchanged from their historical range, although it has been eliminated from parts by hunting for meat and the spread of settlement (e.g., they now only occur in south-west Uganda (in Lake Mburo National Park and Katonga Wildlife Reserve), and have been extirpated from Burundi).

Impala are diurnal and spend the night ruminating and lying down. The peak activity times for social activity and herd movement are shortly after dawn and before dusk.

These medium sized antelopes form three distinct social groups during the wet season: territorial males with and without breeding females, bachelor herds of non-territorial adult and juvenile males, and breeding herds of females and juveniles (including young males less than 4 years). During the dry season, males can be found together or mixed with female herds.

The male impala changes its territory to match the season. During the breeding season the male keeps a much smaller territory which is heavily defended. The males will imprint on their original territory and always come back to that same territory to declare dominance and it’ll use a variety of techniques to defend its territory (including keeping females) like tail-raising, forehead marking, forehead rubbing, herding, chasing, erect posture, fighting, and roaring are used.

Impala are ruminants. The upper incisors and canines are absent and the cheek teeth are folded and sharply ridged. Impala are intermediate feeders. While predominately a grazer, the impala will adapt to any amount of grass and browse. Impala feed mostly on grass during times of lush growth following the rains and will switch to browse during the dry season.

Reedbucks are semi-gregarious. During the wet season, when food and water are abundant, reedbucks can be found in pairs, in small family groups (male, female, and young), or singly. During the winter months, when food and water become scarce, it is extremely rare to find a solitary reedbuck. In pairings, females initiate movements around territories. Though they are more social and may form temporary aggregations during the dry season, during the wet season territories are formed and defended.

When a male approaches females in another males’ territory, an upright posture is presented. Also a slow and deliberate approach leads to either immediate surrender or attack. If the other male does not back off, these physical confrontations can lead to head butting and a display of pushing and shoving with the horns. Eventually one of the males will jump away and the other will strut and display an upright posture, signifying its dominance.

Territories are not well defined and may overlap. Marking occurs by using inguinal glands to scent a landmark. Auditory and visual markings includes pronking, whistling, and displaying a proud posture. The last marking is called horning. This includes rubbing horns and head across vegetation, soil, and shrubs in the vicinity.

A loud whistle is sounded in cases of surprise, fear, and greeting. The whistle is made by expelling air out of the nostrils. During friendly whistling, the reedbucks head is erect, ears point forward, and the tail hangs freely. During a call of surprise or fear, the reedbuck either stands very still with ears and head erect, or plonks violently hoping to scare off the intruder which it normally cannot see. While jumping or plonking there is often a popping noise that is heard that seems to come from the inguinal region which releases and scent marker.