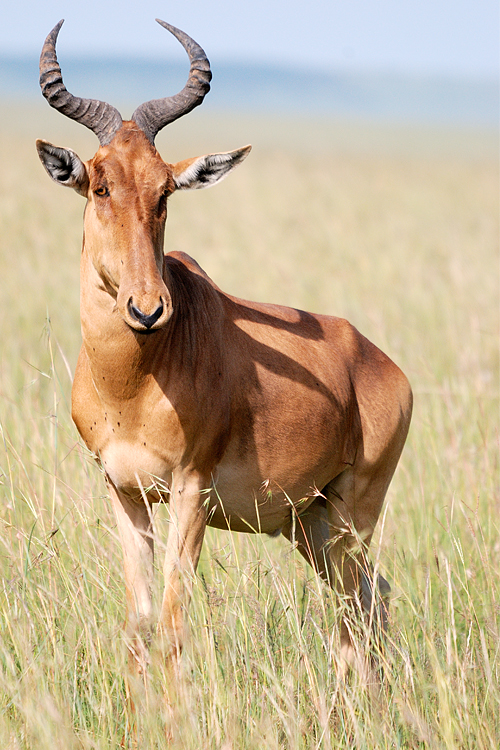 Jackson’s Hartebeest is a specie from the antelope family. 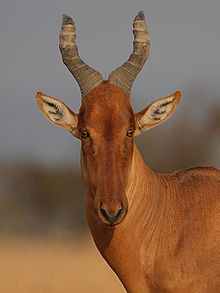 The Jackson’s Hartebeest It is regarded as a hybrid between the Lelwel and Coke’s hartebeest. It has a large antelope with an elongated forehead and a pair of oddly reggid horns. From head to body, it has a length of between 150 to 200 centimetres, weighing over 200 kilograms (440.2 pounds).

Has long legs sometimes with kind of black markings, with a short neck to body, sharp ears and a black short tail. Both the female and male Jackson’s Hartebeest have horns. The female’s are a bit smaller than those of a male.

The horns can exceed a length of 40cm (not to all animals). They are mostly active during the day time and you will observe them graze in fair groups of 20 and above animals. They do graze in the morning and afternoon times in a day.

Jackson’s Hartebeest are so cautious and have a very sharp brain. Calm and humble, however they will change to bitter moods once they are provoked.

While grazing, there will at least be a single animal on the watch for danger. On spotting a predator trying to approach them, they will all be alerted. Lions, Cheetah, wild dogs, jackals, leopards are the Hartebeest major predators.

You will at no point see them associate in the same group. The long and slender legs of Hartebeest help them always to easily run out of danger.

Even in the dry season, the Jackson’s Hartebeest will still feed well on its usual eatings, though to get water into its body, it will feed on melons and stems.

They are mainly grazers who feed on soft short grasses, leaves, stems and so on. Both males and females reach sexual maturity at the age of 1 to 2 years. And mating usually takes place throughout the year though reproduction depends on local factors. Sometimes as a signal that a female is into receptivity, she will slightly hold out here tail abit.

Jackson’s Hartebeest go through an eight to nine months gestation period, after which a single calf is born. Usually weighing 6 to 8 kilograms. A few weeks after birth, the calf will move in its own though in accompaniment with its mother. The calf will stick around it’s mother for over 2 years before it gets to go on its own. These antelopes in Uganda can be found in savanna parks like Murchison falls and Kidepo national parks.