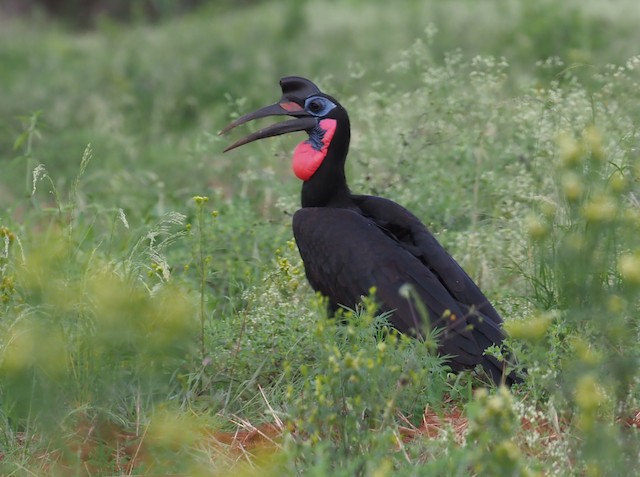 Abyssinian Ground Hornbills are Africa’s most engaging birds living in close knit co-operative family groups. Unlike the other types of hornbills these ones do not seal their nests and walk over large distances to feed. They fly to the trees in case of danger or to breed.

Characteristics of the Abyssinian Ground Hornbill

The male adult bird has; a larger bill topped with an open casqued, a pale yellowish patch at base of upper mandible and, a blue-red skin around the eye and on the throat. The female is slightly smaller and has a reduced casqued, the eye skin and wattle is entirely blue. The immature bird is brownish black with a poorly formed casqued, small grayish wattle. When these birds fly, they reveal striking white primary feathers.

Where to find them

You will find these birds largely woodland species and predominantly terrestrial in nature. In Uganda they are common savanna residents in Murchison Falls and Semuliki Wildlife Reserve. Usually you will find the Abyssinian Ground Hornbills within their habitats in pairs and family groups with strong vocals

A huge ground-dwelling hornbill. Males have a mix of blue and red bare facial skin, while females have entirely blue facial skin. In flight, a large white patch is revealed in the wings. Found in savanna, grassland, and agricultural habitats, usually in pairs or small groups, walking on the ground. Breeds and roosts in trees. Similar to Southern Ground-Hornbill, but there is little overlap in range, and Abyssinian is easily separated by the blue facial skin. The call is a series of deep “boop” notes.