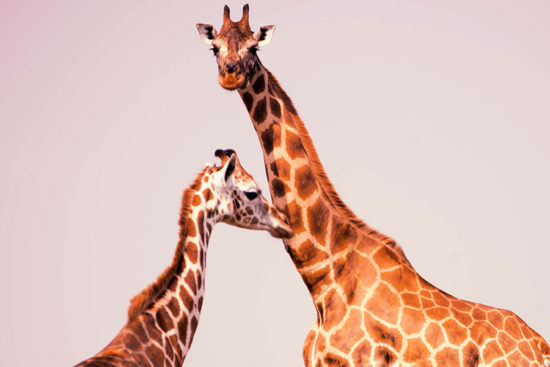 Giraffes are the tallest mammal in the world. Their long legs and necks help them to eat leaves at the top of tall trees that other animals cannot reach. They have long tongues, and no teeth at the front of their top jaw, which helps them to rip leaves from branches. Male giraffes use their necks for fighting, swinging them from side to side to head-butt their opponent.

The long legs and necks of giraffes make them tallest of all the mammals; at around six foot, the legs alone are taller than many humans. They have a distinct spotted coat, with no two giraffes having the exact same pattern. This means that giraffes can be individually identified from their coats, a feature that is often used in the study of wild giraffe populations.

How tall can giraffes grow?

How long is a giraffe’s neck?

Giraffes have long necks that can be over six foot (>1.8 m) in length.

The reason for the long neck is debated amongst scientists, but it is useful for reaching food at the top of tall trees. The added height is good for spotting approaching predators, and males use their long necks to compete with other males, a fight known as necking. Male giraffes swing their long necks and repeatedly head butt the others body. Males with longer and stronger necks tend to win these fights, and often get the female. It is thought therefore, that longer necks may also help when attracting females. Where do giraffes live?

Giraffes inhabit the open plains, grasslands, and savannas of Africa. They are most common in southern and eastern Africa, but some smaller more isolated populations live in western and central Africa.

What do giraffes eat?

Giraffes are browsers, so use their long neck to feed on the leaves, shoots, and fruits of tall bushes and trees. They feed on a variety of plants and diet varies depending on location and season, but acacia leaves and shoots are most common.

Do giraffes have teeth?

Yes! Giraffes have 32 teeth, the same number as humans. However, their mouths look very different to ours. Teeth are located at the front of the bottom jaw, but only at the back of the top jaw. Instead of teeth they have a lump of tissue known as a hard plate, or dental pad, at the top of their mouths, which helps them to grip the leaves.

How long is a giraffe’s tongue?

Giraffe tongues are long, reaching around 20–21 in (50–53 cm) in length. Giraffe tongues and lips are tough and specially adapted to allow giraffes to forage on trees that other animals would avoid, such as acacias, which are very thorny.

What color is a giraffe’s tongue?

Giraffe tongues are dark bluish in color, which is thought to be a form of sun protection.

How do giraffes give birth?

Giraffes are polygamous, so a few males with mate with one female. Females tend to give birth to a single calf around 400–460 days after mating; females give birth whilst standing up.

Baby Giraffes can stand within half an hour and after only 10 hours can run alongside their family. Young giraffes hang out in nursery groups until they are around 5 months old, resting and playing together while their mothers forage in the distance; one female will tend to stay and look after the young. Males are not involved in the raising of young.

How much do giraffes sleep?

Giraffes have one of the shortest sleep requirements of any mammal, and will only sleep for around four hours a day. They sleep either laying down with their necks resting on their bodies, or standing up. Sleep occurs in short intervals, sometimes less than a minute.

Where to find giraffes in Uganda.

Book a safari with us at #mondsafaris